One thing that I try to emphasize to my students is that mathematicians don’t spend their time (usually) doing calculations. They spend a lot of time trying to make sense of scenarios, and trying to answer bigger questions by breaking them down, and they spend a lot of time being curious. One of the most important skills of a mathematician, to me, is to try to find a good question. Last week, we had one of my favorite geometry lessons of the year, in which we just spend the entire class playing and posing questions.

I asked students to spend the first 10 minutes of class just constructing isosceles triangles, and whatever may go along with them. At this point in the year, we have covered constructions of perpendicular bisectors, midpoints, angle bisectors, and we just discovered a variety of triangle centers: orthocenters, centroids, incenters, and more. Students are encouraged to use either pencil and paper, GeoGebra, or both. After playing around and having several sketches and constructions completed, I encourage them to spend 5 minutes looking at their own drawings as well as those of the other three group members, and do a little noticing and wondering. While they do this, I model this process as well, both with a doc camera and with GeoGebra on my SmartBoard.

I’m always impressed with the variety of questions that students come up with, and this year was no different: 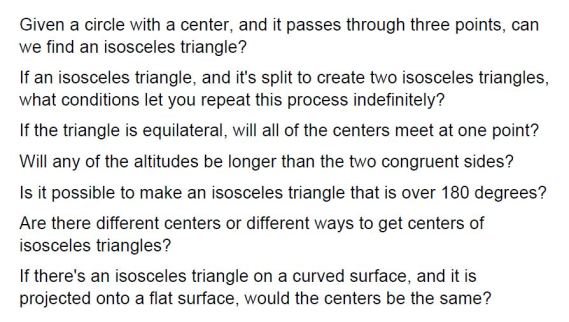 I made a video and narrated it, showing the steps as well.

Well, it turns out that when you do interesting things and share them on Twitter, you get a wonderful variety of interesting other things happening.

Mark Kaercher (@shskaercher) had all sorts of brilliant ideas to explore:

Exploring the paths of Points of Concurrency:
“Can you figure out which is which?”@Ethan_MidPen @geogebra #playwithmath pic.twitter.com/g4SkQ4gk29

Steve Phelps (@giohio) suggested tracing the incenters and excenters together, and later put a whole bunch together:

Do the paths really all intersect at these two points? pic.twitter.com/6J9j8Z3Yck

I did the orthocenter experiment you suggested in Cabri, because GeoGebra does not give me the equation of a locus, or at least I don’t know how to get it. I used a unit circle centered at the origin, and I put B on the x-axis. See below for the equation. pic.twitter.com/woXswfCPUP

And then Henri explored further:

I was thrilled to watch this thread, although I barely was able to take part. You see, I started this post on Monday morning before school, and partway through my second class on Monday, a family emergency came up and I’ve been otherwise occupied for most of the time since then. For anyone I haven’t told who reads this and is curious, please feel free to reach out and ask. Everything isn’t great or okay, but I’m being cautiously optimistic at the moment, and really yearning to get back to the classroom and back to the world of math and teaching and a sense of normalcy.

I research mathematics teaching and learning in secondary schools

Musings on math and teaching

Keeping track of my "Ahas!"

I'm not good at this yet, but I'm working on it.

Innovative math lessons you can use in your classroom today

The mathematics I encounter in classrooms

Lighting the world with math, one student at a time.